Skip to primary content
Skip to secondary content
BU’s media services people used a new program called Echo 360 to capture the conversation in Boston last Wednesday between Sulayman Al-Bassam, Graham Holderness, and me.  Watch it here: : http://echo360.bu.edu:8081/ess/echo/presentation/7a568a3f-fce4-45ba-b2a1-9c119488e55e
Apologies for the weird focus on the video – I think everyone is still getting the hang of the new technology.
“How do you make a play about an abstract idea like change?”  Sulayman Al-Bassam speaks to the Boston Globe.

Judging by the dress rehearsal I saw last night, there are still some technical things to be ironed out before tonight’s opening (never mind the idea of change – the real issue is that these guys are scrambling for provisional closure, editing to the last minute!), some meanings to be nailed down, but the play has an amazing energy.

Boston people: come see the show and any of the myriad post-show or para-show events at ArtsEmerson! Reminder: you can also see Sulayman and me in discussion with Graham Holderness at BU this afternoon, 12-2.

Excited that this informal event at BU is actually happening!

The “Arab Shakespeare Trilogy”:
Staging a Region in Tumult, 2002-2011
A conversation with dramatic examples:
Kuwaiti theatre director Sulayman Al-Bassam
and Prof. Margaret Litvin (MLCL)
Born in Kuwait and educated in Britain, Sulayman Al-Bassam founded the Sulayman Al-Bassam Theatre (SABAB) in Kuwait in 2002. He has directed his Shakespeare adaptations on four continents, including at the Royal Shakespeare Company, the Kennedy Center, and BAM. SABAB productions are characterized by a radical approach to text, bold production styles, and playful, provocative combinaons of content and form. The Speaker’s Progress, the final play of Al-Bassam’s “Arab Shakespeare Trilogy,” opens at ArtsEmerson in Boston on October 12.

Wednesday, October 12, 12-2pm
The Castle, 225 Bay State Road
Lunch will be served before and during the talk
Sponsored by the Peter Paul Development Professorship, the Department of Modern Languages and Comparative Literature, and the Arvind and Chandan Nandlal Kilachand Honors College 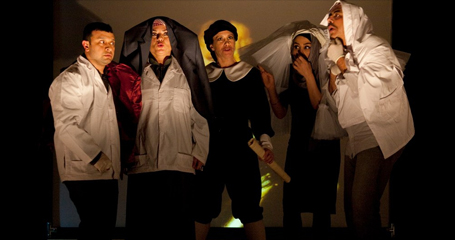 Swear to Allah, it’s not theatre!  ArtsEmerson in Boston has officially announced its 2011-12 season, and Sulayman Al-Bassam’s pseudo-post-but-actually-meta-theatrical The Speaker’s Progress, a dark and jam-packed take on Twelfth Night,  is on the schedule for October 12-16.  Details and a video clip here.

Sulayman has put up a few clips of Speaker’s Progress, with surtitles. Some version of this show is coming to BAM and Boston’s ArtsEmerson this fall.
(Sorry I can’t quite get the video to be the right width – working on it. Link here.)

This is not about “Arab Shakespeare” per se, but I want to write about this production, so I’ll use the pretext that Shakespeare’s Merchant of Venice does depict an Arab: the Prince of Morocco.  Though not as well known as Othello or Aaron the Moor from Titus Andronicus, the Moorish suitor echoes them in certain ways, loving Portia “not wisely but too well.” Doomed by his unseemly fascination with luxury commodities (gold!), he chooses the wrong casket (all that glitters!) and quickly leaves the scene.
The show I saw last weekend, by Theatre for a New Audience (directed by the Yugoslavian-born Darko Tresnjak) at ArtsEmerson in Boston, made the strange decision to costume the Prince of Morocco (the fine African-American actor Raphael Nash Thompson) as Gulf Arab royalty.  Here he is flanked by Portia and her staff on the left, his own weird attendants (why does his head of security look like a flight attendant for Emirati Airlines?) on the right.  Yes, that’s an engraved sword he’s presenting to Portia.

What’s up with this?  The role is unabashed ethnic caricature, and in modern productions a sort of turbaned Leo Africanus (or Moorish Ambassador) getup is typical.  But playing the Prince this way let Tresnjak emphasize that this production was really about money as much as ethnic difference.  Portia (Kate MacCluggage)’s feelings toward this suitor were ambiguous; she allowed herself several apparently heartfelt racist comments (“May all of his complexion woo me so!”), but she also seemed very attracted to him physically and comfortable flirting with him.  The exotic sex appeal?  The oil money?  Both?  Unlike her second suitor, he was a dignified and well-spoken man, a true member of the international aristocracy.  In the end she may have been a bit disappointed (though she said otherwise) that he chose the wrong box, the one labeled “Who chooses me will get what many men desire.”  Childish, conformist Moor.  What a pity.

The odd portrayal of the Moor ties in with what was so strange about the whole production.  Tresnjak’s Venice is made to resemble New York circa 2008, a glitzy and fratty town where the tone is set by young investment bankers flying high on testosterone and Starbucks.  The phones are smart and the Wall Street boys are too, trading the smug elbow jabs of financial capitalism at its most arrogant.

The setting has potential, but why isn’t Shylock integrated into it?  He is simply a man attached to his home and his daughter and his tribe: not even necessarily a banker.  This makes him timeless, simply “a Jew.”  We never see him in anything like a work or office setting; his home is full of decontextualized Jewish kitsch (lanterns, candelabra, vague klezmer music), a weird break from the Apple-store sleekness (as my sister-in-law observed) of the rest of the set.  This — and the fact that Oscar winner F. Murray Abraham’s acting towered over that of others, especially the milquetoast Portia — makes the whole Wall Street setting with its 21st-century shenanigans suddenly irrelevant. The anti-Semitism is frat-boy cruel, but Shylock’s response is simple atavism.

Everything else the production has going for it — Portia’s evident jealousy of her Bassanio’s love for the closeted Antonio, Jessica’s visibly growing nausea at the betrayal she has committed, Gobbo’s rap antics — is overshadowed by this basic failure to integrate the production’s strongest character into its underlying premise. Incomplete allegory is the biggest risk of contemporary-dress adaptations; this show succumbs.

By the way, the ArtsEmerson folks all but announced that Al-Bassam’s Speaker’s Progress is coming to Boston next fall.  Stay tuned!