In a discussion of an al-Jazeera segment on “religion and politics” today, it finally came home to me what it means for a country to have an opportunity to write itself a constitution from scratch.  Yes, I had known it before, but realizing it was huge.  Imagine what would erupt if the U.S. were facing a moment like that, now, today, not in 1783? What kind of gruesome compromises would we come up with this time? (Assuming they were compromises at all and not fast-forward to the Civil War.) What an amazing crossroads to be at. 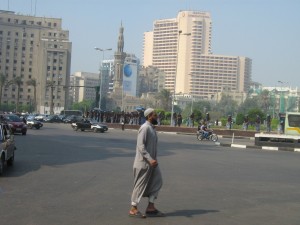 This doesn’t happen so often in history. Unlike Iraq a few years ago, Egyptians have a relatively clean crack at a constitution, with no occupying army breathing down their neck.

Or at least, only occupied by their own army. The military presence is far more obtrusive than before January 25. Look at the “Siniyya” (tray, or bowl) in the center of the Tahrir traffic circle in the photo above: ringed with state security guys even on an ordinary day. The next big demo (“miliyoniyya”) isn’t planned till Friday. I’ve heard several people use the word “qishra,” like a thin skin or vegetable peel or facade, to describe what this “revolution” has peeled off from the reality of praetorian rule — apparently this is enough of a cliche to have merited a whole Marxist analysis on Facebook months ago.