My friend works in H.R. for an international company and speaks fluent English. She never gave much of a damn about politics before last January. Then she was in Tahrir almost every day. Her Facebook posts went from English to colloquial Arabic. We met up this afternoon.  I was so happy to see her again, after only communicating online since my last visit in 2008 – she looks great! 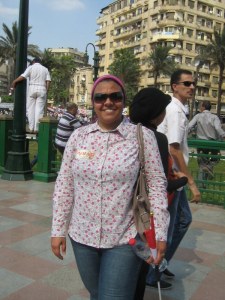 .
(The sticker on her shirt says “civil state” — part of the Dawla Madaneya campaign. I was given one too, though no one for a minute mistook me for an Egyptian.)

And apparently my friend is starting a project to help educate rural Egyptians about political decision-making and electoral rights. Didn’t catch all the details this time (as she hurriedly explained them to the representative of a group of fellaheen, peasants or farmers, who had come to the square to counter the government’s attempt to coopt them by creating a new holiday and holding an official Farmers’ Day celebration) but I’ll keep you posted