The movement to boycott the elections seems not to have gained much traction; Thanassis Cambanis’ post yesterday quotes some voters explaining why.  The popular blogger Sandmonkey (aka Mahmoud Salem) is even running for parliament himself!  But a number of activists remained in Tahrir yesterday, or showed up there after voting.  As I went to take the metro around 4pm yesterday to pick up my kids from school, I saw them organizing themselves to perform the protest recorded here (Activist Gigi Ibrahim’s video: Tahrir, Nov 28 2011):

The video includes an interesting argument about the Salafis.  Says the man on the left: “They were with us in Tahrir from the first days. Some of the young guys are quite sincere. Those are the people we want.”  His interlocutor is skeptical.  These are some of the divides these activists will have to bridge (and it will require some ideological nose-holding of which almost no one I know would be actually capable!) to be effective rather than just self-righteous.

Mohamed Mahmoud Street, home of the AUC side gate (through which we would normally enter for our classes on the Downtown Campus) has been renamed “Ayn al-Hurriyya” street: Eye of Liberty. It looks like a sort of modified war zone now: cleaned up, but the field hospitals are still in place (that’s the guy in the blue helmet with the goggles and the piles of donated blankets) and you can see where the pavement has been torn up for rock-throwing ammunition. The guys checking passports at the entrances to the square were exceptionally polite to me. The young man in the white t-shirt and red keffiyyeh encouraged me to take a photo over the tape divider into Mohamed Mahmoud Street.  He said he is not voting: “I lived in England for two years, and when there were demonstrations there, the cops hit you, but they were civilized.  Here, it was like… [a gesture of severe beating].” 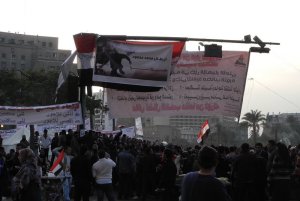 Again you can see the revolution iconizing itself in almost real time, and with excellent graphic design help coming from somewhere: the big poster with the running man and the tear gas says: “Heroes of Mohamed Mahmoud Street, Thank You!”