Today was the 6th of October, 38th anniversary of Egypt’s “victory” over Israel in the October War of 1973 (known from the Israeli point of view as the Yom Kippur War). I’ve always written the word “victory” in sarcastic quotation marks, without giving it a second thought (since actually Israel won the war, striking back and driving Egyptian forces back across the Suez Canal after their amazing advance), but today — and if you’ve ever served in a military this might sound really stupid — I had to recognize the intensity of emotion attached to that word for many Egyptians. Even my secular, skeptical, open-door-policy-hating theatre critic friend described the crossing of the Bar-Lev Line as miraculous.

I made my best effort to get into the October 1973 War Panorama [official site – scroll down] on the Salah Salem Road.  For curiosity/kitsch value, I thought. I’ve always driven by and wondered what it was like. One of my favorite articles [full text requires subscription] on the revolution had been a New Yorker piece whose ironic lede took author Wendell Steavenson to the cavernously empty Panorama. Well, clearly August was not October. Today the place was mobbed, jammed, with Egyptians seeking entry tickets, which were free on the occasion of the anniversary.  Normally they are 2 pounds (30 cents) for Egyptians, 10 pounds for Arabs, 20 pounds for foreigners.

Most people were very orderly and patient as they waited in line. One woman with a napping baby in her arms had been waiting for two hours!  Everyone I asked was coming for the first time, or hadn’t been since a long-ago school trip.  Why were they here?  عشان نتفصح… عشان نحتفل … عشان النهارده اجازة.  To sightsee!  To celebrate!  Because we have a day off!
But there was an undertone of discontent. Some people started to complain, even one man started to orate, about the poor organization, how there was “no system.”  You had to line up to get a free ticket, then line up again to get in the gate; meanwhile the people coming out, sandwiched between two pushing lines of increasingly overheated people trying to get in, complained that the show hadn’t been worth it: “You watch five minutes of it and khalas, you’re done.”
(All this recalled an old Nasser-era joke about a new system to sell chicken through a cooperative: the customer stands in a series of queues to choose whether he wants a rooster or a hen, live or slaughtered, befeathered or plucked, whole or in parts, etc. — only to be told at the end: “Well actually, there’s no chicken. But اي رايك في النظام how do you like the system?”)
But on the whole people wanted to feel patriotic. Flags, lots of red-white-and-black clothing, and even these kids, 4 1/2 and 2 1/2, dressed up as Sadat, in full regalia, complete with toy guns. His nametag said Sadat; hers said Gihan.

Off the hook for the Panorama’s multimedia propaganda show (“Tickets are free today, but foreigners have to pay for tickets, but we can’t sell you a ticket today because they’re free, so why don’t you come back tomorrow?”), I asked a family nearby how to get to the Manassa, the Tomb of the Unknown Soldier and Sadat’s grave. They kindly gave me a ride. They had driven all the way in from Faysal, by the Pyramids, “to celebrate our armed forces” – عشان نحتفل بفواتنا المسلحة. To my amazement (but why?) they said this entirely without irony. Mom, dad, three kids ranging from college age to 7. Had they known it would be a pro-SCAF demonstration? They were thrilled to join (that’s mom and dad waving the flag). 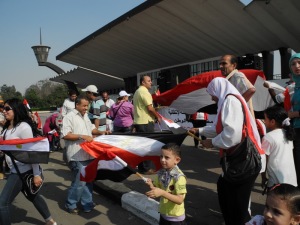 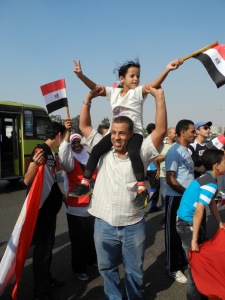 Today was not only a sort of PR show for SCAF (which organized a big official celebration in Tahrir, and whose warplanes have been buzzing the square for three days) but also a chance to meditate on the beginning of Mubarak’s rule.  precisely the 30th anniversary of Sadat’s assassination: he had been reviewing a parade on the occasion of the 8th anniversary of the war when an Islamist conspirator had run up and shot him; then-Vice President Mubarak reportedly dived under a chair and survived. Today the stand bore a banner: “Na3am lil-thawra, la lil-fawda” (“Yes to the revolution, no to chaos.”)

You could argue that there is a fine line between supporting SCAF now (deploying the “it’s them or chaos” trope) and supporting the old Mubarak system. And indeed, one lady had a pro-Mubarak sign:

I don’t even live here, but at the sight of those signs I felt my “takfir siyasi” (political excommunication) reflexes rising. Didn’t even say goodbye to the sweet family who gave me the ride, who had been so thrilled about my being American and speaking Arabic. Certainly didn’t exchange phone numbers or get photographed with them as they had intended. Yet somehow all these people have to live together, and devise some kind of public rituals to convince them that the revolution belongs to them all.

What is to celebrate? I thought as I ran across fast-moving Salah Salem Street to Sadat’s tomb. Hold on tight to your seats.

There is still a tough crossing ahead 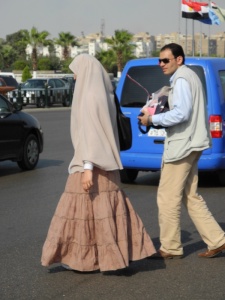 (and yes, that is a newborn baby in his arms).