Protesters slip easily into what the Egyptian Gazette called “the Friday routine” of demonstrating.

People kept cool however they could, some putting newspapers on their heads. (A whole range of different newspapers, from Al-Sha3b to Al-Masry al-Youm.)

The Central Security forces occupying the “bowl” at the center of the square and the military vehicles in the surrounding streets had disappeared at midnight on Thursday; the only sign of government presence were some ambulances. Since it has been reported (or at least rumored) that Egyptian security forces have used ambulances to hide weapons to give to thugs to use against the demonstrators, this did not arouse a lot of confidence. 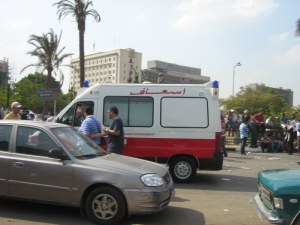 But when I was there no one was nervous either. The atmosphere was like a block party, with friends greeting each other happily (many of these friendships seem to have begun in Tahrir in the first place), vendors selling water and snacks as well as all sorts of souvenirs, and people of different ages and social classes (notably the better-dressed “civil state” demonstrators and the rowdier Ahly crew) greeting each other with great courtesy: Munawwareen!
Some slogans against America and Israel, notably rare (though not absent) in the original Jan-Feb protests, have begun to surface. Check out the intricate collage this guy made!

Graffiti: “Egypt will not become another Afghanistan!”