The Global Shakespeares web archive has put up QuickTime video of Mohamed Sobhi’s Hamlet, a landmark production first staged at the Art Studio Theatre in 1971 and then reprised and filmed for television in 1976-7.  Filming was directed by Nur al-Demerdash.  The full-length video is here – it runs over two hours.  Helpfully, they’ve posted some excerpts too — individual scenes that are more convenient to use in class.

I should say, “landmark” does not mean it’s great theatre. Critic Hani Shukrallah memorably summed it up in a 2001 column about Sobhi on the occasion of the latter’s controversial (and awful) Ramadan mini-series dramatizing the Protocols of the Elders of Zion.

Meanwhile, we are supposed to look forward to Egyptian “character actor” Mohamed Sobhi performing no less than 14 roles in a TV serial dramatising the Protocols of the Elders of Zion, which apparently has had millions spent on it and is to be broadcast in many parts of our glorious Arab nation. The casting is apt. Sobhi is symptomatic of “the state of the nation” — or is it civilisation? Several years ago I had to suffer through a Hamlet performed by this man, hailed as one of our great actors. I’m no drama critic, but even I could recognise that Sobhi’s acting skills seem to lie precisely in “saw[ing] the air too much with… [his] hands” and “tear[ing] a passion to tatters.” Little wonder, perhaps, that he is so well admired; tearing a passion to tatters seems to be a particular predilection of “our civilisation” these days.

Later I’ll try to comment on particular scenes, either here or in the metadata on the Global Shakespeares web site.  Meanwhile, I just wanted to tell the story of how I obtained this video.

Sobhi has, in case you didn’t notice from the quote above (he played all the parts in his own miniseries!), a certain sense of his own importance. And Egyptian society has rewarded this attitude with all kinds of celebrity and adulation. When I made a trip to Cairo in 2007 while working on my book, a theatre scholar friend managed to find me Sobhi’s cell phone number.  Someone else tried to give me Sobhi’s number too, but it was incorrect.  Anyway I called and made an appointment to meet and talk about his Hamlet.  But he wasn’t in Cairo.  He had built himself a studio complex way out in the desert along the Cairo-Alexandria road.  He had called it Sonbol City for the Arts, after a character in one of his films. Okay.  I hired a car-and-driver and made the trek.  It was about an hour and a half.

Sonbol City included film editing facilities, a swimming pool, health club, various meeting rooms, etc. But it was a pretty surreal – sprawling and empty, except for Sobhi himself, who was editing his latest Ramadan series, attended by a skeleton staff of a couple of dozen people. I don’t know if it has filled up since then.

I don’t know if you can see the images of Sobhi in these photos – they were everywhere.

Along with comedy/tragedy masks and vignettes from his films, etc., including from the period of his collaboration with Egyptian playwright Lenin El-Ramly (the two split up quite a while ago). 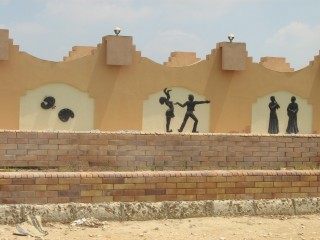 Plaster casts of the greatest Egyptian entertainers: that’s Umm Kulthum second from right with the sunglasses. 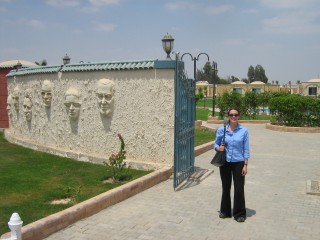 And on the walls, stylized portraits of Sobhi in his most famous roles…

…including Hamlet.  (You can see in the film… he looked a little better than this.)

Anyway, I waited for a while and then the man himself came out to talk with me. He was tired and unshaven, in the middle of that Ramadan serial. But he gave me a great interview – we talked for over an hour, discussing many details of his Hamlet production — of which, at that point, I had only read reviews.  Most reviewers had focused on the play’s opening scene: it starts with the epilogue, Hamlet’s funeral. Sobhi said he did this in order to make the audience think: “I didn’t want them to sit there wondering what would happen, but asking themselves why it had to happen.”  When I remarked that this sounded like a Brechtian desire, he said: “No, it wasn’t Brechtian or anything.”  Finally I asked if he could share a recording.  Yes, he said.  There was an old videotape.  It was from the 1970s.  It was film but then had been converted to VHS.  He didn’t have it with him.  Could I meet him in Cairo in two days?
I could, but stupidly I somehow spent the whole day calling the incorrect cell phone number.  When I finally called  the right one towards evening, it was too late — he was already back at Sonbol.  But he had taken the VHS tape with him.  Could I come pick it up?
Fortunately, the driver remembered the location and was able to go without me.  He picked up the tape and brought it back to Cairo.  Then he nearly refused to accept money, so thrilled was he to be able to meet the great actor in person, to actually shake Mohamed Sobhi’s hand. Back in the US, I had it converted to a DVD, and now the good people at Global Shakespeares have posted it online for your delectation.  Enjoy!