October 6 is the only day of the year, and the only reason, for which many Egyptians make an exception and speak well of Sadat. 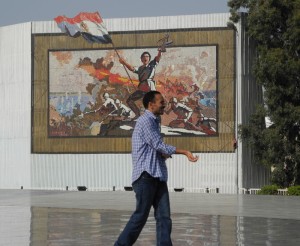 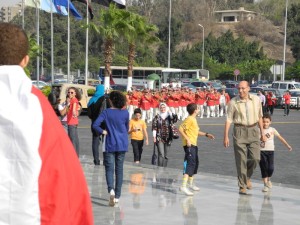 Watch them getting photographed at his grave, open to the public this year for the first time (under Mubarak, one photographee told me, it had been closed: “Only the leaders would come and put wreaths, and we would see it on television”). This afternoon, a marching band, Hizb al-Ghadd members standing around looking official (why?), and a fully democratic photo opportunity:

Lots of wreaths, this one from an insulation manufacturer called Insumat: 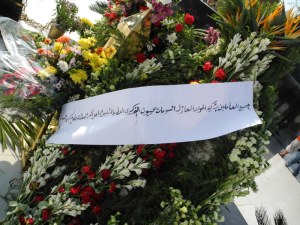 What to do with the overdetermined symbolism of Sadat? He helped Islamist groups and messages gain unprecedented dominance of the public sphere, yet it was an Islamist group that killed him. His tomb is pyramid-shaped (“I’ve killed Pharaoh!” his assassin reportedly shouted), but those ornamental spirals cut into each stone wall panel are actually letters spelling the first name of one of the casualties of the 1973 war.  (Can you see them? Scroll back up or find clearer images here.)  And that’s before we get into the economic liberalization business. Even without a revolution thrown into the mix, the Sadat legacy would be too complicated to digest. Still deep ambivalence here about 1973 and 1978. Over coffee this morning my friend (in her mid-60s now) recounted her vivid memories of hearing about the miraculous Egyptian advance, despite the Israeli napalm-delivering pipes that, she said, “were capable of turning the Suez Canal into a river of fire” — but then she quoted from a poem by Naguib Sorur:

(“I am so afraid on Victory Day… We win Sinai, but lose Egypt!)

In his official speech today, a very put-together-looking Tantawy compares the Egyptian people’s fortitude in this “transitional period” to its fortitude in 1973.  Not altogether promising, given the eventual results.  On various TV channels, slender earnest young hostesses interview various gray-haired men (that’s who traditionally appears on TV, I think) about “Sadat’s role” in the 1973 war, and the effect of the Camp David Accords.  In the newspapers, everyone from onetime Sadat assassination plotter and current Gama3a Islamiyya leader Aboud ElZomor (fascinating long interview) to Sadat’s widow Gehan (still trying to rehabilitate her husband’s presidency – also in Arabic here) reflects on the phenomenon of Mubarak’s rule as an unintended consequence of Sadat’s. Meanwhile writer-activist Ala’ al-Aswany deploys a “salon” as a cultural protest on the sidelines of the official SCAF celebration to bring out some less-told stories of October 1973. All fascinating. Has there been a rash of scholarship on this period at some point, which I’ve somehow missed?